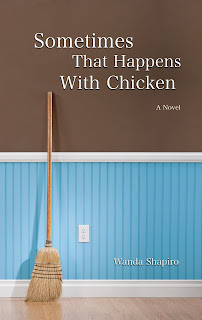 I've got lots of questions. So let's get right to it.

1) How did you decide to write Sometimes That Happens With Chicken? Was there a message you were anxious to convey? Or a publishing void you wanted to fill?

I don't write for fame or fortune and even though Chicken ended up having several messages, I didn't set out to convey them. I write because sentences come to my mind and I feel compelled to write them down. I guess you could call it a calling. I know that term is usually used in religious terms, but it's the closest word I can find for the interior drive I feel to put words to paper. Writing novels simply feels like what I'm supposed to be doing.

2) Did you query agents or publishers before deciding to self-publish your book? If so, what sort of responses did you receive?

Before I was ready for the full-on query process, I casually queried one agent who was a friend of a friend. He was not nobody and he showed some interest in Chicken but I managed to offend him almost immediately. Having offended that agent felt like kismet when I got a call a few weeks later from a small press wanting to publish my book. A friend of a friend had emailed him a copy of Chicken and he called me immediately. He called me a genius at dinner and in subsequent conversations made a very strong case why his tiny press was better for my book than Random House. It was a very heady time in my life and before I had time to send any queries, I had signed a contract with this small press and received a small-press-sized advance.

Then this heady time turned into a writer's nightmare. The editing process was already underway and I had met my cover-designer-to-be, but the economy and the general state of the publishing industry was taking a huge toll on small presses and mine was one of the ones that was forced to suspend operations or face economic disaster. I got a call no one wants to get but I was released from my contract and free to pursue publication again.

I was gearing up for the query process again, and not looking forward to it. I was left with my small publisher's arguments against the big publishers rattling around my head and every writer's dream - a book deal with Random House - had started to lose its appeal. Coincidentally, and thankfully, I started researching self-publishing around that same time because I thought it was an option my husband should consider for a non-fiction book idea he was working on. I read Aaron Shepard's Aiming at Amazon and even though Shepard advised against self-publishing fiction in the first few chapters, I got a glimmer of an idea that indie literature could actually work.

I did several more months of research before I made my final decision, but I never queried another agent and no publisher ever had a chance to reject Sometimes That Happens With Chicken.

3) What marketing strategy or strategies do you believe have been most successful in promoting your book thus far? How do you measure "success" in this context?

Unlike with non-fiction where you can leverage the keyword long tail, marketing fiction is all about word of mouth. So for me, success lies in seeing the word spread beyond my immediate social network. Thanks to the amazing connectivity provided by today's online world, I started seeing that happen in the first week after I launched my site. People I don't know are hearing about me and getting interested enough to talk about me and my book. That's success when it comes to indie literature.

4) Editing is always a challenge for authors who self-publish. Did you have help with your editing/proof reading? Did you hire a professional in this area?

I believe solitary editing of one's own work in preparation for publication is impossible. I didn't hire a professional but I did put together a team of intellectual volunteers some of whom coordinated with me on the hard edit, others of which came in for the various rounds of copy editing. And it was a long process! I didn't start the copy editing (for things like typos and spelling mistakes) until the hard edit of the book was complete. For that I worked closely with my husband, a former college professor. There were many issues we had to talk out, debating the merits of many edits down to the sentence and word level. I lost track of how many rounds is took us to finish the hard edit of Chicken, but it was around eight. After that, the copy editing took another ten or so rounds of eyes (when you count all the volunteers). But keep in mind that I set the bar very high when it came to every aspect of this process. I was shooting for professional quality production values which I could not have achieved alone.

5) What advice would you like to pass along to the readers at Self-Publishing Central who are trying to decide whether they should self-publish?

It's not a decision to be taken lightly. If you're going to do anything in life, it's best not to do it half way, and self-publishing is no different. If you're going to do it right - with a high quality product and a well planned launch - it's going to take a lot of work and it won't happen overnight. You can't rush a quality product to market and most likely you will have to learn how to do things you've never done before. Anyone can publish a book but if you really want to sell books you have to wear many hats. Not all writers want to be a publisher and an editor and a publicist and a brand manager and graphic designer and a typographer and a webmaster, but that's what it takes to be an indie author.

6) I know that your book has not been for sale for very long -- but are you pleased with your self-publishing experience so far?

As a publisher, even at this early stage, I've received enough feedback to have full confidence in my indie plan. I believe I will publish many novels and I believe I will be able to make a living doing so. It's still a little early to tell how long it will take to turn this pipeline into a career, but any doubts I had are in the past.

As a writer, I couldn't be more pleased. My work is being well received across a wide demographic and an audience is beginning to grow. Since my website launched in February, I've been compared to Hemingway, Hitchcock, Salinger, and Burroughs. Not many debut novelist can say that, no matter how their book got published.

Thanks so much for your insights into the self-publishing biz. I know I've learned a lot. And I'm certain some of our readers will, too.

Wanda has a great blog at http://www.onegirlonenovel.com/index.php/the-plan/ Please go and check it out.

Readers -- thanks for visiting. Hope to see you again soon.