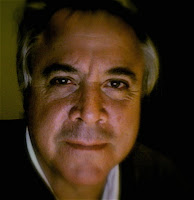 Greetings and thanks for stopping in to Self-Publishing Central.

Today I am pleased to welcome author, Pete Morin, who has just released his new book, Diary of a Small Fish, in multiple ebook formats.

I've known Pete in a virtual sense for a couple years now. And I had the rare privilege of reading a beta version of Small Fish last year. It was a terrific read back then. And I hear it's even better now.

Pete's got an agent who has been working diligently on his behalf to place this book with a major publisher. But as we have learned, even having a great agent doesn't guarantee you will find a home for your book in these turbulent publishing waters.

Pete's going to share with us today parts of his road to publication. I hope you enjoy it. I know I did.

John: How about a brief introduction, Pete?

Pete: Okay. My name’s Pete Morin. I live in a money pit on the south coast of Boston with my lovely wife, a young adult son and a flock of overbearing, diarrheic wild turkeys.

John: How old were you when you wrote your first story?

Pete: The first time I tried, I was about 10. I’d just finished reading Goldfinger. I proceeded to write my own spy novel, titled Silverthumb. I quit after the first page.

John: When were you first published?

Pete: A short story was published in the Vermont Cynic, the University of Vermont newspaper, in 1976, as the winner of its first short story contest. Soon after, I became its copy editor and arts/entertainment editor, which got me front row seats and backstage passes to concerts.

John: Why are you passionate about writing?

Pete: I really have no idea. A few years back, I visited an energy healer who read my energy and told me I should be writing. Sounded good to me. (That’s a true story.) I think it’s Karma.

John: Tell us about your ‘writing life’ to date?

Pete: Since I re-started fiction writing in February of 2008, I’ve finished one novel, started 12 short stories and finished 8, and completed most of a second novel. I spent too much time on Authonomy years back, but earned what little acclaim it offers and received a positive review from a Harper Collins assistant editor (I assume). The experience convinced me to continue. That manuscript garnered representation from the first agent who read it, the fabulous Christine Witthohn. Most of the shorts have been published in one place or another, and one is due for a rather auspicious honorable mention that I cannot disclose.

I spend anywhere from ten minutes to ten hours a day staring at work in progress.

John: What are your goals for the next five years?

Pete: Besides seeing my current two novels in print, I just want to be involved when writers come out on top of the publishing revolution. I want to learn how to write a whole novel in nine months. I want to: watch my wife stay as lovely as she is, my son become a successful fantasy writer, and my daughter become a successful New York food writer (and marry a rich man); preserve my health and sanity; and keep my handicap below 10 and my weight below 220.

John: All admirable goals. Tell us about the books you have out?

Pete: At this time, I have self-published one short story, Giving It Away, and a collection of six short stories, Uneasy Living. These are stories that are best described as literary fiction that deal with man’s reaction to good fortune, bad luck, sorrow, abandonment, alienation, loss and betrayal. They were written at a time when I was grieving the loss of my father and the imminent loss of my mother, so they are uncharacteristically somber and maudlin for a man of my usual exuberance and good cheer. Still, I know that they get inside the people who read them and make them laugh and cry, so I think they’re pretty successful.

John: What do you say to new writers?

Pete: Be yourself, keep your day job, read everything you can get your hands on, and pay attention to craft!

John: Anything else you'd like to offer? Maybe a plug for your brand new book?

Pete: First of all, thanks for hosting me on your blog, John. Decent of you. Then, of course, I'd appreciate it very much if everyone ran right over to Amazon, BN, or Smashwords and grabbed a copy of Diary of a Small Fish.

John: Thanks for stopping in, Pete. Best of luck to you in your continued writing endeavors.

Here's a cover pic of "Small Fish" and some further background you'll want to know about Pete.

Pete Morin has been a trial lawyer, a politician, a big government general counsel, a lobbyist, and a grand jury witness. He is now a trial lawyer, a writer and a blues guitarist. He is represented by Christine Witthohn of Book Cents Literary Agency. His short stories have appeared in 100 Stories for Haiti, Words to Music, Words With Jam, and NEEDLE, A Magazine of Noir.

You can find Pete, if you want, here:

On Dead Tree Paperback or Alive in EBook!

For Having Way too Much Fun 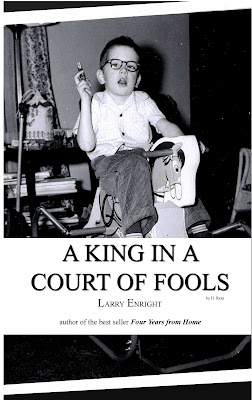 Physical Description: Too big for his britches, too tough for his own good

Distinguishing features: a scar in the shape of your nose on his right hand

To report a sighting, to read a sample, or purchase please contact A King in a Court of Fools

Hours of enjoyment reading stories from the Book of Tom 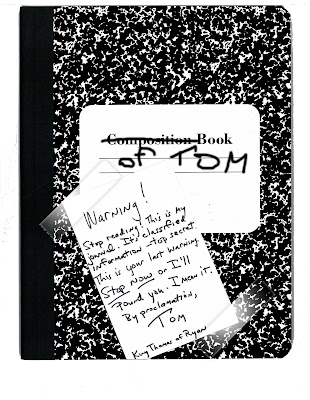 It’s been a while since I’ve seen it, but that’s how I remember the chicken scratch from the cover of Tom’s journal. Tom Ryan — he’s my big brother. He was in sixth grade at the time he started keeping it. He was ten and I was five. Sister Jeanne Lorette made him do it, he said. Tom thought it was punishment for constantly misbehaving in her class. He would say that. That’s how he was. I think she was just trying to help him express himself in ways more productive than his usual tough guy act.

Speaking of tough guy acts, I’ve always imagined that if Tom had the room on that composition book cover, he would have added:

You’re still reading, aren’t you? I warned you, but you couldn’t stop, could you, you nosey-baloney? Well, it’s too late now. And don’t bother wiping your prints off the book. I have my ways. And don’t try to hide either. I’ll find you.

Go ahead, keep reading, but once you know the secrets, it will be the last thing you ever read.

Tom was big on threats. That was his modus operandi. He was under the impression that it was the only way to get anyone to do what he wanted. So he picked on us a lot, but we all knew he was a softy deep down — all talk, no action. You know the type. I honestly don’t remember him doing anything really nasty to anyone, except kids who were picking on us. And I’m sure he felt totally justified in those cases because he was doing it for a good cause.

Of course, I can’t speak to his behavior once he moved on to high school. I saw less and less of him and the gang had, by then, disbanded. But before that, we were all part of his gang and under his protection, whether we wanted to be or not.

Tom’s journal is long gone. It’s unfortunate in a way. It would be much better hearing his story in his own words rather than from my memory of the events that took place that year. It seems like so many years ago. But I imagine like all the other evidence he wanted “lost,” he covered it with Testors cement and burned it when he moved on to the seventh grade. Or maybe he buried it in the side yard. We’ll probably never know. I’m sure he’ll never tell, and I doubt Mom and Dad will be digging up the yard any time soon to find it.

That leaves you with me to piece this together. You have to keep in mind that I was only in first grade at the time, so my reading skills were limited. Simple chapter books were easy, but not sixth grade Tom-ese. He used words I’d never heard of, words I found out later I was better off not knowing.

How did we get our hands on Tom’s secret journal? My other brother, Sam and I found it. We used to sneak into Tom’s bedroom despite the threat of the “Keep Out or Die” sign on his headquarters door. Or maybe it was because of that sign and the inherent danger involved in tempting fate. In any case, we’d play with the toys he never let us touch, we’d look out his window at the Ioli’s house across the street just like he did when he was preparing for a mission, and we’d rifle through his drawers looking for his secret stuff. That’s how we found it. He kept it hidden under a pile of shoes in his closet. It smelled like old shoes, too. That was cool, but the coolest thing? The journal was about us.

Tom was chronicling the adventures of his gang for Sister Jeanne Lorette. Every chance we got, we would sneak in, and Sam would read it to me or I would try reading to him. We had a blast with it. The way Tom described his adventure we couldn’t believe it was about us at first, but there was no doubt after several pages that this story was our adventure as seen through his imagination. And did he ever have an imagination.

So, if you’re willing to accept it on that basis and for what’s it worth, I invite you to enjoy the story of A King in a Court of Fools.

About the book: A King in a Court of Fools, originally published as a serial novel, is Larry Enright’s second published work. It is humorous, nostalgic fiction about kids growing up in the 1950s and has been already enjoyed by ages ten through ninety-one. It is available in both eBook and paperback from Barnes & Noble and Amazon.com. Click for details to Purchase or sample A King in a Court of Fools. 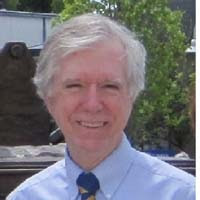 About the author: Larry Enright was born to Irish Catholic first-generation immigrants and raised in Pittsburgh. After college, he moved to the Philadelphia area where for the past 40 years he has filled his life with many careers including musician, teacher, programmer, researcher, and writer. He has written three other novels, including the best-selling Four Years from Home. Visit Larry Enright's site.