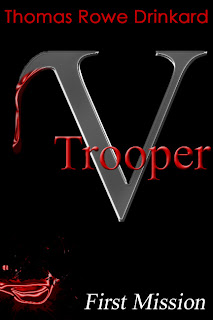 Welcome to Self-Publishing Central. I always appreciate you stopping by.

JOHN: Tom, what have you got to tell us about your new release?
TOM: Thanks for asking, John. Here's a brief intro:

Wil Boyd is a soldier. He’s an MP sergeant assigned to Afghanistan. He is also a vampire.

Boyd’s secret is discovered by a man who sees him as a potential weapon in taking the war to the Taliban.  The vampire is to become the V Trooper, who can terrorize the terrorists.

Boyd’s unique abilities are put to their ultimate test when he is called on to execute a mission, alone—behind enemy lines and far from any support. His task is so vital that failure could change the course of the war and Middle East history.

Boyd attacked.
None of the three saw him until he grabbed one who was about to send up another load. The man was bent over his task when his feet were snatched from under him. Before his face hit the pavement, a powerful hand cupped under his chin and pulled his neck back. Before he could yell, something hit him behind the ear. Blinding pain and darkness followed.
The second man inside saw a shadow that was blacker than the rest and stepped back, to run. A gloved hand stifled him and thunder sounded as a red flash in front of his eyes preceded unconsciousness.
The third thief had seen scuffles through the fence and started to pull the ladder back as something moving down the ladder like a soundless desert storm engulfed him.  An eyeblink before he was knocked unconscious, he saw a vision that would have loosened his bowels. Eyes like smoldering coals glowed above a mouth with teeth like a steel viper.

For the rest of you, here's a bit more about Tom: 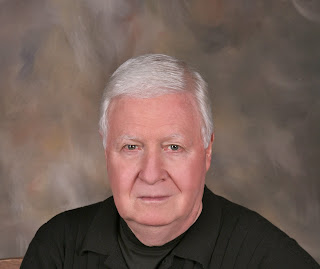 Thomas Drinkard was born and reared in the Deep South—Alabama. He graduated from the University of North Alabama with a degree in English.  At graduation, he was commissioned as a Second Lieutenant in the United States Army and went on active duty eight days later. Within two years, he volunteered and was accepted into the Special Forces (Green Berets) after Airborne and Special Forces school, he’d found a home. With a few other assignments in between, he spent ten years with the fabled unit. He was unhappy with the Army’s plans for his future and left active duty and moved into the reserves.  He is now a Major, retired reserves.


After the Army, he found his way into teaching and writing in the securities licensing preparation business.  His textbooks, articles and CE courses are in use today. His poetry can be found in a number of literary magazines, including Negative Capability, Cotton Boll/Atlanta Review, Elk River Review, Sisyphus and others. One of his Vietnam poems was chosen for inclusion in Whatever Remembers Us: An Anthology of Alabama poetry.


Piety and Murder was his first novel, and the prequel; Where There Were No Innocents followed. The novella, V Trooper, is a departure for him in both form and genre. It is Tom’s first venture into the paranormal and the shorter format. The book is first in a series.

Thanks to everyone for stopping in.
Cheers!